One of world's deadliest snipers leaves home in Canada to fight in Ukraine: 'I have to help' - News Chief
News

A former Canadian soldier known as one of the world’s deadliest snipers arrived to Ukraine to help the nation defend itself from Russia.

“I want to help them. It’s as simple as that,” the Canadian man, only identified as Wali to protect his family’s safety, told CBC. “I have to help because there are people here being bombarded just because they want to be European and not Russian.”

He crossed into Ukraine on March 1 along with three other former Canadian soldiers after Ukraine President Volodymyr Zelenskyy called on foreigners to join the war against Russia’s invasion.

“They were so happy to have us,” Wali told the CBC of the people who greeted the former soldiers with hugs as they entered Ukraine. “It’s like we were friends right away.”

Wali, 40, has a young family and works as a civilian computer programmer. He said the “hardest part” of making the decision to join the war was missing his son’s first birthday.

“A week ago, I was still programming stuff,” he said. “Now I’m grabbing anti-tank missiles in a warehouse to kill real people. … That’s my reality right now.” 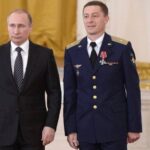 Next Article Colonel Andrei Zakharov, commander of a Russian tank regiment, was eliminated by the AFU in the Brovary district of Kyiv region.

Inflation rose 7.9% in February, as food and energy costs push prices to highest in more than 40 years

Inflation grew worse in February amid the escalating crisis in Ukraine and price pressures that became more entrenched. The consumer price index, which measures a […]

Russia has suspended the production of Buk SAM, Kub SAM and Tunguska SAM.

These are short-range and medium-range air defense systems and facilities for Russian troops. Reason: sanctions have worked. They do not allow Germany to supply the […]

Soldiers of the Armed Forces of Ukraine surrounded an entire unit of the enemy. The Ukrainian military showed footage of the cleansing of the territory […]